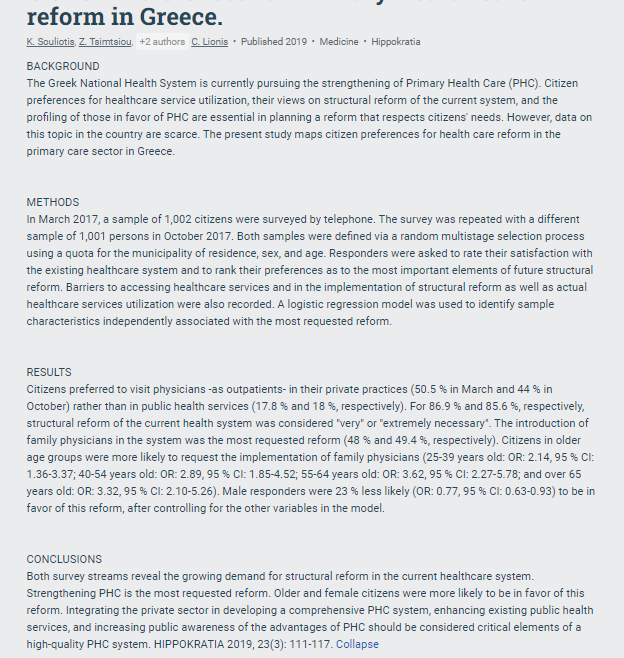 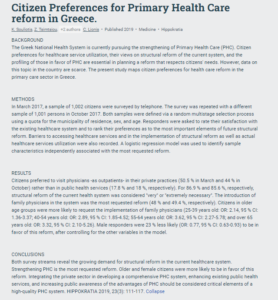 Background: The Greek National Health System is currently pursuing the strengthening of Primary Health Care (PHC). Citizen preferences for healthcare service utilization, their views on structural reform of the current system, and the profiling of those in favor of PHC are essential in planning a reform that respects citizens’ needs. However, data on this topic in the country are scarce. The present study maps citizen preferences for health care reform in the primary care sector in Greece.

Methods: In March 2017, a sample of 1,002 citizens were surveyed by telephone. The survey was repeated with a different sample of 1,001 persons in October 2017. Both samples were defined via a random multistage selection process using a quota for the municipality of residence, sex, and age. Responders were asked to rate their satisfaction with the existing healthcare system and to rank their preferences as to the most important elements of future structural reform. Barriers to accessing healthcare services and in the implementation of structural reform as well as actual healthcare services utilization were also recorded. A logistic regression model was used to identify sample characteristics independently associated with the most requested reform.

Conclusions: Both survey streams reveal the growing demand for structural reform in the current healthcare system. Strengthening PHC is the most requested reform. Older and female citizens were more likely to be in favor of this reform. Integrating the private sector in developing a comprehensive PHC system, enhancing existing public health services, and increasing public awareness of the advantages of PHC should be considered critical elements of a high-quality PHC system. 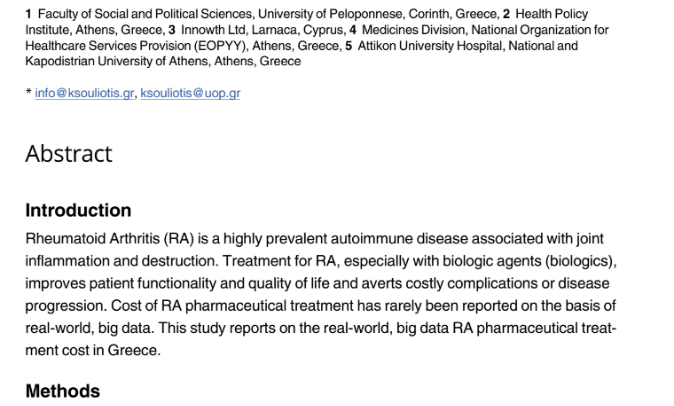 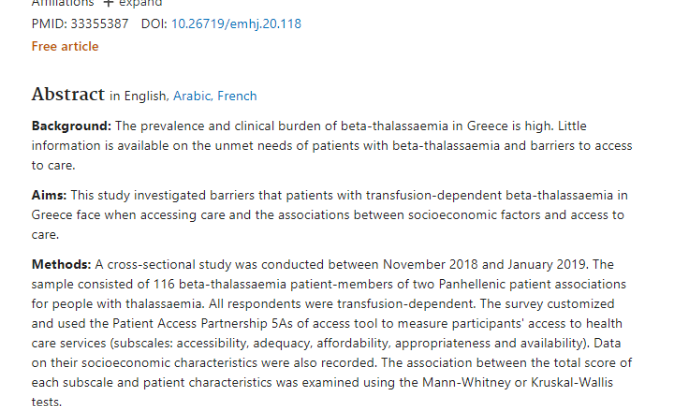 Access to health care for patients with thalassaemia in Greece: a cross-sectional study

We use cookies on our website to give you the most relevant experience by remembering your preferences and repeat visits. By clicking “Accept”, you consent to the use of ALL the cookies. Read More
Cookie settingsACCEPT
Manage consent

This website uses cookies to improve your experience while you navigate through the website. Out of these, the cookies that are categorized as necessary are stored on your browser as they are essential for the working of basic functionalities of the website. We also use third-party cookies that help us analyze and understand how you use this website. These cookies will be stored in your browser only with your consent. You also have the option to opt-out of these cookies. But opting out of some of these cookies may affect your browsing experience.
Necessary Always Enabled
Necessary cookies are absolutely essential for the website to function properly. These cookies ensure basic functionalities and security features of the website, anonymously.
Functional
Functional cookies help to perform certain functionalities like sharing the content of the website on social media platforms, collect feedbacks, and other third-party features.
Performance
Performance cookies are used to understand and analyze the key performance indexes of the website which helps in delivering a better user experience for the visitors.
Analytics
Analytical cookies are used to understand how visitors interact with the website. These cookies help provide information on metrics the number of visitors, bounce rate, traffic source, etc.
Advertisement
Advertisement cookies are used to provide visitors with relevant ads and marketing campaigns. These cookies track visitors across websites and collect information to provide customized ads.
Others
Other uncategorized cookies are those that are being analyzed and have not been classified into a category as yet.
SAVE & ACCEPT